In an article in the Daily Freeman, Supervisor James Quigley recently spoke about his fear that the Hudson Valley would lose the interest of big business now that the people have made our environmental concerns clear, and public. I am hopeful that he is right… and relieved.

“I can tell you that, over the last couple of weeks, I’ve had discussions with brokers for other projects, and when I’ve told them what we are going through with Niagara, they’ve said, ‘Thank you very much, goodbye,’” he said.

It seems to me that any company that is unwilling to go through a thorough Environmental Quality Review before setting roots here, would be unfit for the health and well being of the Hudson Valley.

“My view is that the reputation that has now been felt in Ulster County that relates to environmentalism is going to discourage any business that has a complicated approval process from considering the county for a site,” Quigley added.

Yes Sir! Yet this should not be a discouragement! Isn’t that the point of State Environmental Quality Reviews––to assess the impact a project has on the environment/community? If a company wants to come and pollute their way into “entrepreneurialism” in the Hudson Valley, they should know ahead of time that this is not the place to come spreading sludge.

I would like to thank Mr. Quigley for the Positive Declaration on this proposal. He could have been a scumbag, and pressed for it to go through with a Negative declaration on Environmental Impact.

He was not. And as a matter of fact, though perhaps reluctantly, he is expressing his recognition of who we are:

“Quite frankly, that may be what the community wants. The community may not want complicated projects that have potential for environmental issues.”

He is right; many of us who live in the Hudson Valley treasure what makes the Hudson Valley the Hudson valley––beautiful. And, from Vogue to Governor Cuomo’s own PR campaign, this Valley is recognized for what we have. People come here from all over the world, to enjoy our natural resources.

And that is perfectly okay. We like it that way.

I would like to thank Mr Quigley again, this time, for making that observation, and being willing to say it in print.

While, there are some people willing to trade their health and safety for the speculation of low paying jobs, many of those who live in this area came, or stayed to make home, to raise our families,  and even plant trees that we may never sit in the shade of…

There are plenty of people who will step up and say, 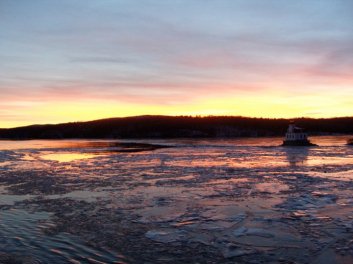 “Oh, No! Now we will be chasing big business away” And to those people, I say… There are plenty of places in America, where you can go to find industrial parks to make your new home. If that is truly your prerogative… But this is the Hudson Valley.

Now, according to the Lehigh Valley Business News, in case a bottling plant is where you really want to work…

“Lehigh Valley [in Pennsylvania] has 20 beverage manufacturing companies, the second highest of 22 regions in the state, using boundaries defined by the state Workforce Investment Act. According to the data, the 20 Lehigh Valley companies employ a total of 1,856 workers.”

If you notice, the numbers here, are placed in the thousands to lead the reader to believe that his is a hefty amount of jobs. But break it down…

Compare that to Mother Earth Storehouse, in the Town of Ulster, who employs about 80-90 people.

“If the city of Kingston … [and] the town of Ulster are limited to taking 4 million gallons a day, economic development in this community is going to be stifled,” said Quigley, whose town gets water from Kingston’s supply. “At the end of the day, if we were to bring a chip-manufacturing plant in and they were asking for 2 million gallons of water a day, the issues raised by the opposition do not change. The effects on the environment are the same — if they are, in fact, valid.”

I believe that they are valid concerns, and I do not believe that manufacturing is the ticket to the Hudson Valley’s Economic growth plans.

The article goes on to say that:

“When IBM operated a computer-testing plant in the town of Ulster, it bought up to 1 million gallons of water per day from Kingston’s supply.”

But the writer neglects to say, here, that the IBM Computer testing plant left the grounds at Tech City contaminated, which is one of the major reasons it is undesirable for new business ventures, and sits empty.

So how do we preserve the natural sanctity of our shared home?

I believe that it is time Governor Cuomo and the MHREDC change the economic development directives for the Hudson Valley (at least), and find the answers by inviting businesses with integrity.

Seems simple right? But from what I understand, the MHREDC wants nothing to do with a Sustainable Hudson Valley, believing as Mr Quigley does, that sustainability is a growth killer.

I disagree, it just directs what kind of growth…. and I don’t understand why the public opinion is not a clear indicator of where to focus one’s energy as an elected official. Isn’t that what elected officials are supposed to do?

Last night, after reading the article I reference here, but not finishing this piece, I came across this:

“Brad Will, who chairs the Common Council’s Laws and Rules Committee, has submitted the proposal to the council for review.

The proposal, Will said, is expected to be reviewed first by the council’s General Government/Public Safety Committee at its Feb. 26 meeting.” -Kingston Freeman 2/17/15

Let’s show up and support this effort!!

And then, this morning, I woke to this:

Ulster County Legislature Resolution No. 38 February 17, 2015 Opposing The Pilgrim Pipeline and its plans to run down the Thruway Corridor.

This is another showing of governmental support of the people’s safety!!!

Thank you, Legislator Manna Jo Greene and Legislator Wawro and all of those who support this resolution!!!

View this document on Scribd

Tomorrow will be one week since we were made aware of Niagara Bottling Company’s retreat from The Town Of Ulster, and Cooper Lake’s water.

It feels good to believe that Government For the People is possible.

Speak to it... Cancel reply